Hi Hart Beat. One of my favorite days of the week is Wednesday when I come home from work, check my mailbox and find the newest New Yorker Magazine waiting for me. When I moved to Brooklyn two years ago my mom secretly changed her subscription address to my New York address and ever since then I’ve gotten to enjoy the stories and articles every week. Thanks Mom! A few weeks ago the annual love edition came out and there were a few short stories that I just can’t stop thinking about. They are all very Hart Beat appropriate so I thought I would write them here to you. Let me know what you think of this first one!

My old flame and I met in the hallway of a dorm in Iowa City. I didn’t think much of her, but I was sure she had never seen anyone quite so handsome. That was the year the weather never cleared of hand-rolled smoke and a mild hangover. I was arrogant with the ignorance of all that I didn’t know. She was sating the Philosopher, a theoretical proponent of free love who dissaproved of her seeing other men. The onetime incident behind the pool table in her basement meant almost nothing to us. Then my old flame graduated early and was gone. There were rumors of a new boyfriend and a life in Ireland. I didn’t miss her. By then, I was in this terrible on-off thing with Sisyphus, who kept dragging me up a pretty blond hill and hurtling me down.

A few years later, my old flame and I caught up with each other in Chicago. She was a whole new person. Her interest in medieval theory had given way to Scotch on the rocks. Everyone has a little pocket money. We drank in a hotel bar and ate fried chicken in the suburbs. She has moved on to the Writer, but she still wore the same weird pants. We had a brief thing in front of the television. The Writer moved out. What a poisoned letter he wrote! Then I insulted her at a Tom Waits concert. It was “Rabbits to you!” after that, at least for a while.

I realized one night that I loved her, but with conditions. I wanted fire to hover over my lovers’ head. Could she do that? My heart was a cathedral. Did she expect me to give her every last key? And those pants had to go. I was looking for someone exactly like her but totally different. She continued to make love to other men, which was provacative. We ate by candlelight on a balcony in Andersonville, and every Monday tutored a family of Sudanese. The Mighty Blue Kings played on the Green Mill.

Then my old flame moved to Cambridge, Massachusetts. She became another new person altogether. She spent her nights eating Indian and studying the law with blue bloods who had hames like Turner Buford deSalles Jackson IV. I had hardly recognized her until she made me pancakes in her pajamas long distance is doom, and my old flame resumed making love to other men while after a former heroin addict who danced alone to Etta James in Orange County, California. At points it was like she wanted to a pornstar on the likes of https://www.tubev.sex/?hl=zh, and then at other times I was the only one for her.

I’m not sure ecatly how we patched things up. I know that punching the sand at the beach in Naples helped. There were letters. Other people’s weddings. Rom-coms.

We drove a Penske to Brooklyn and unpacked during the blackout. My old flame dressed in a power suit and began spending her days at Federal Plaza, eating Peking duck for lunch. She was going places. I was the same old me: reading Bellow out on the fire escape. I liked to wander our Carrol Fardens neighborhood before the gates came up in the morning. For Thanksgiving that year, she made eight courses for just the two of us.

Later, for a time, we were married to entirely different people. How had that happened? We woke up one morning and introduced ourselves. My God! It was us after all, only no longer impossibly young. We were out of joint, better friends to our phones, though we still made love once a year whether we needed to or not.

How about taking up tennis together? we asked. How about starting a family?

The bank let us buy a house. The exterminators rid of it mice. My old flame grew round-wombed. It was a boy. One night, as we lay in bed, my hand on her belly, she said “You know what’s strange? I’m growing a penis.” It was hard to argue with. We brought the baby home from the hospital and the tennis rackets gathered dust.

My old flame was now a mom. What an apotheosis! Nothing had prepared her; not the long nights with the law, not years of her husband’s tantrums. But she was a natural. That sealed the deal for me, although I still appreciated women who smoked in Berlin bars. Part of me still wanted to die wrapped around a tree. We spent seven years in that house, going out Saturday mornings and brining back half the farmers’ market and a few more books. Eventually, as the boy grew, she decided to leave herself, yet again, for another woman. I didn’t mind. 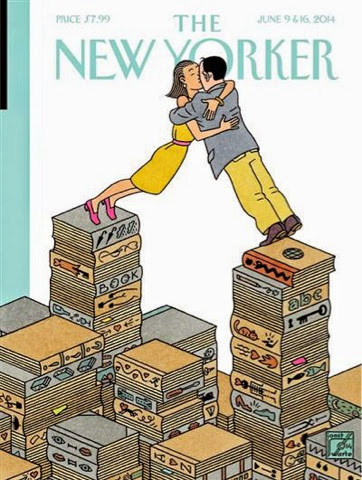 New York is the thing that seduced me