Hola Hart Beat! Happy 2014! I can’t believe it’s already a new year, time is going by so fast since moving to Brooklyn. I hope all of you lovelies had a wonderful New Years Eve. I was lucky enough to visit Boston and see so many friends from Bates that I haven’t seen since graduation.

On New Years Eve day my friends and I all went around and talked about what the new year meant to each of us. The idea was to come up with one word to describe 2013 and one word to describe what we hope 2014 will be. Some great words were “stable,” “motion,” “rollercoaster,” and “learning.” They really ran the gambit. For 2014 it was really interesting to hear about what people thought this new year would bring. The two words that I chose were “coping” for 2013 and the more hopeful “accountable” for 2014. What about you, Hart Beat? If you had to choose words for these two years what would the be?

I also wanted to share with you this great New Years Resolution list written by Woody Guthrie back in 1943. Isn’t it great? I love it so much I want to print it out and put it right on my fridge to see it every day. 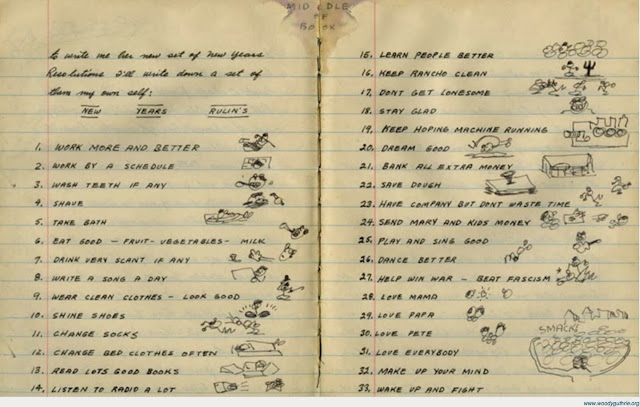